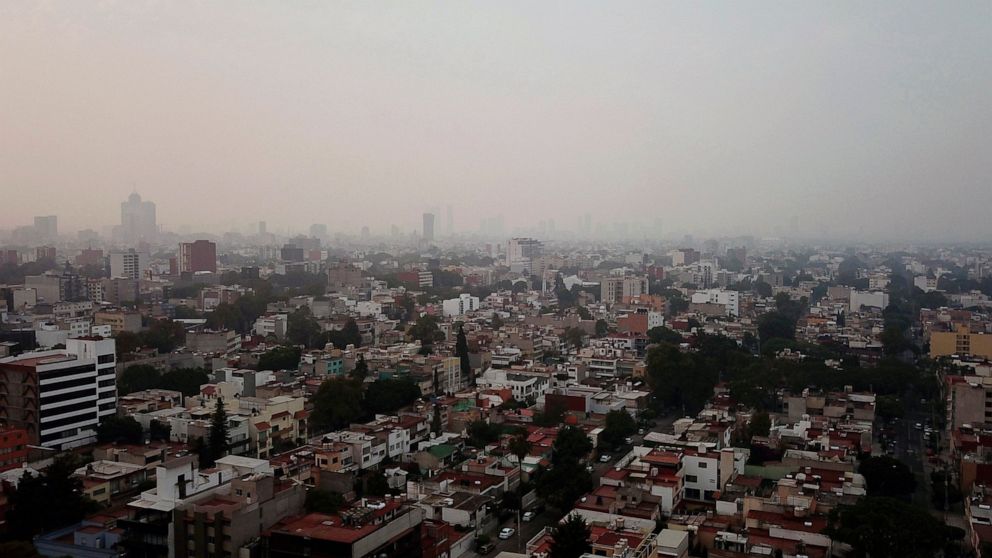 Mexico City’s government warned people Sunday to remain indoors as forest and brush fires carpeted the metropolis in a smoky haze that has alarmed even many of those accustomed to living with nagging air pollution.

Outdoor activities on the capital’s main avenue continued, although fewer capital dwellers than usual came out to bike, rollerblade or do aerobics on Paseo de la Reforma, parts of which are closed on Sundays for exercise. The capital and surrounding metropolitan area are home to about 22 million people.

The Environmental Commission of the Megalopolis said the air was polluted with high levels of solid particles, such as ash, that can cause respiratory problems and other illnesses upon prolonged inhalation. In recent days, 258 firefighters have been dispatched to extinguish 13 brush fires, four fires on barren plots of land, two house fires, a forest fire and a blaze at an industrial warehouse in the capital. In the nearby state of Mexico, 992 firefighters have been sent to fight 30 fires.

At the same time, fires in the southern states of Oaxaca and Guerrero — combined with a high-pressure weather system — have carried contaminants into the Valley of Mexico and trapped them there, the commission noted. And in Tepoztlan, a popular weekend retreat just south of the capital, authorities closed access to archaeological ruins over the weekend while they stamped out fires that consumed more than 200 acres of grass, bushes and other flammable plants.

The hashtag #SmokeinCDMX was trending on Twitter, while an image of the iconic Angel of Independence statue on Reforma circulated with the angel donning a gas mask.

Meza blames the city’s increasingly high levels of air pollution on global warming. Mexico’s dry season has extended in recent years, leading to less rain during the summer months and higher temperatures. The capital has the added challenge of being in a valley, which traps dirty air and particles. Then there are the millions of cars belching exhaust.

And now the fires.

Curtains of smoke have blanketed the capital in recent days, blurring visibility at street level— especially at night— and invading nostrils with the smell of smoke. Parents of young children have reported that their little ones are awakening with nosebleeds.

“Last night it smelled burnt,” said Michelle Serralde, 40, who joined Meza on roller skates Sunday in spite of the poor air quality, she said, “because we have so few free days.”

Nearby, a city-sponsored aerobics session wrapped up for the day. Irene Cruz, a 60-year-old whose gives instructional courses on how to use fire extinguishers on weekdays, sweated it out for four hours in the sun Sunday despite the warnings.

Pollution “is something we live with every day,” Cruz said dismissively, joking that she would rust out if she ever left the city of her birth.

Hits: 3 A court in Saudi Arabia has ruled that a Yemeni man be executed for attacking and wounding two dancers and a security guard during a performance in Riyadh By ABDULLAH AL-SHIHRI Associated Press […]

Hits: 2 A series of blasts in Sri Lanka on Easter Sunday, blamed on religious extremists, recalled the worst days of the countrys 26-year civil war. A look at a long and troubled history marked […]