RJ Barrett #9 of the New York Knicks shoots the ball dunks the ball against the Detroit Pistons on November 6, 2019 at Little Caesars Arena in Detroit, Michigan.

An activist investor in Madison Square Garden Co., Blue Harbour Group, is encouraging the sale of a portion the New York Knicks and New York Rangers in order to boost MSG share performance ahead of the planned spinoff of the sports teams, Bloomberg News reported this week.

Shares of Madison Square Garden rose 1.2% on Thursday on the Bloomberg report from Wednesday that Blue Harbour Group’s CEO, Clifton Robbins, estimates that the two New York sports team are worth as much as $7.2 billion, and believes a possible sale of the part of MSG’s stake it plans to retain would be a great way to maximize shareholder value. 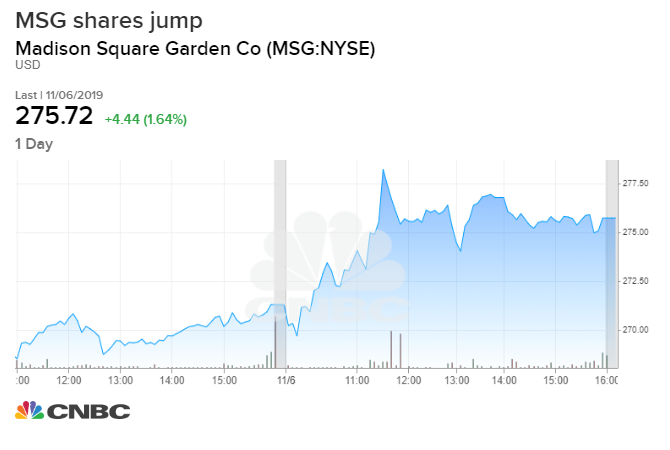 James Dolan, executive chairman and CEO of MSG, has been planning to spinoff the struggling New York teams from the other MSG assets, which include the Madison Square Garden arena and Radio City Music Hall. MSG plans to retain one-third of the sports assets after the spinoff. Robbins, whose firm has a 4% stake in MSG, is reportedly pressuring Dolan to sell a portion of the sports franchises ahead of the planned spinoff in the beginning of 2020.

MSG, which has a market value of about $6.6 billion, would get a large boost from the sale of the highly valued assets. Robbins told Bloomberg he thinks shares of MSG are worth about $400 per share today. The stock closed at $275.72 on Wednesday.

Through Wednesday, shares of Madison Square Garden are up only 3% since January. The activist investor group has been looking into ways MSG can boost share performance.

Silver Lake Partners, which owns about 10% of MSG, reportedly offered buying a larger stake in the MSG sports teams ahead of the spinoff, the New York Post reported Wednesday.