Alexandre Lacazette is not worried who finishes as Arsenal’s top scorer this season as long as the club win something.

Lacazette and fellow striker Pierre-Emerick Aubameyang have shared 11 goals in total so far this campaign, goals that have recently helped propel Unai Emery’s team to nine straight wins in all competitions.

Both players head into the Monday Night Football clash with Leicester City at the Emirates locked together on four Premier League goals apiece.

Lacazette, though, would be happy for the Gabon international to win the Golden Boot this season if it meant a return to north London of the Champions League and trophies come the end of the campaign.

“Really, for me no,” he said when asked in an exclusive interview with Sky Sports if there was competition between the two players.

“If Auba score 40 goals and we go to the Champions League and as well we win something, I will be happy because this season we just want to win something.

Emery has not always played the two forwards together in attack this season, preferring to often go with one frontman away from home instead. 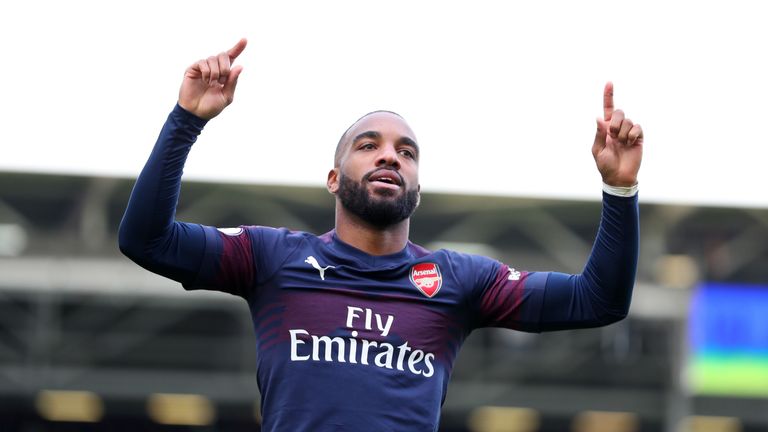 However, when paired together, they have shown a “natural” understanding that bodes well for the remainder of the campaign.

“It is natural, we just have fun, we laugh, but we work as well,” said Lacazette of his relationship with the France-born Aubameyang.

“OK, people can see that we smile together, we are a good partnership. But when we have to work, we work. We know when we can work and when we can laugh and we just enjoy laugh and football together.

Heading into the international break, Arsenal were flying high sitting fourth in the Premier League, just two points off the top.

And Lacazette puts their impressive start to the season down to all the hard work the players have been doing on the training ground with their new Spanish manager.

“Since the coach took the team we work a lot tactically, offensively, defensively.” he said. “We work on everything because we know we have to improve every part of our game.

“So we just work every day and this is the fruit of the work.”

In fact, the club’s fans could even be heard singing “we’ve got our Arsenal back” in their most recent outing, a 5-1 thrashing of Fulham at Craven Cottage.

“We feel the fans are now happier, so we just want to make them happy,” said Lacazette. “We play our football, we have the result and have scored many goals.

“I think everyone has pleasure in the team, so we need all the team and it is like the goal of Aaron. He came from the bench and he gave something else, something more in the team.

“So everyone wants to help the team to go as high as possible.”

Predict 6 correct scores for your chance to win Jeff’s £1 million.

This website uses cookies to improve your experience while you navigate through the website. Out of these, the cookies that are categorized as necessary are stored on your browser as they are essential for the working of basic functionalities of the website. We also use third-party cookies that help us analyze and understand how you use this website. These cookies will be stored in your browser only with your consent. You also have the option to opt-out of these cookies. But opting out of some of these cookies may affect your browsing experience.
Necessary Always Enabled
Necessary cookies are absolutely essential for the website to function properly. This category only includes cookies that ensures basic functionalities and security features of the website. These cookies do not store any personal information.
Non-necessary
Any cookies that may not be particularly necessary for the website to function and is used specifically to collect user personal data via analytics, ads, other embedded contents are termed as non-necessary cookies. It is mandatory to procure user consent prior to running these cookies on your website.
SAVE & ACCEPT